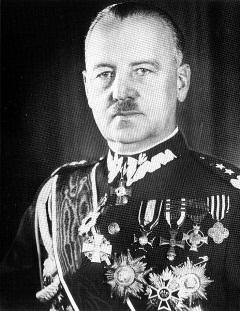 Prominent statesman and political leader, soldier and commander in three wars, the art of war theorist.

During World War I he fought in the Polish Legions and later in the newly created Polish Army as the 5th Army Commander during the Polish-Soviet War of 1920. In the early years of interwar Poland he held highest governmental posts; he was the Prime Minister and Minister of Military Affairs.

Following Coup d’état (1926) he fell out of favour with the new regime. As a result he settled down in his country mansion in Parchanie near Inowrocław where he dedicated most of his time to socio-political writing.

After 1939 September Invasion of Poland he fled to France, moved to Great Britain where he became a vigorous advocate of the Polish cause in the diplomatic sphere. He recreated the Polish Army in Exile both in western and eastern Europe, the latter on the Soviet territory. He became Prime Minister of the Polish Government in Exile and Commander-in-chief. His long service to Poland was unexpectedly severed by his tragic death; Sikorski died in and air crash on 4 July 1943, after his plane plunged into the sea shortly after takeoff from Gibraltar.